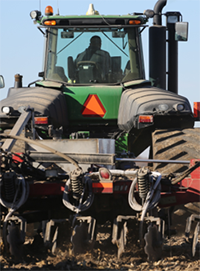 As harvest winds down, the work for the year does not. Once the combine is out of the field, it’s time to think about fall applications, specifically anhydrous ammonia applications.

At Carroll Service Company in Lanark, Illinois, Agronomy Marketing Manager Nick Lapacek starts preparing for these applications months in advance. He offers advice for his peers to follow now in order to help the process go smoothly.

Wait for the Weather
Lapacek says one of the most important steps is to wait for the right weather. He advises holding off until a nice sunny day when the soil is moist — but not saturated — and the temperature is consistently below 50 F.

The temperature is important, because that’s when Nitrosomonas bacteria slow down. When it’s above 50 F, Nitrosomonas is responsible for nitrification. “They are converting the nitrogen into a leachable form, and when that happens, we lose nitrogen,” Lapacek says.

Once the temperature drops below 50 F, the risk of nitrification also drops dramatically.

Prepare for Nitrogen Applications
Lapacek also suggests being sure you’re prepared before you apply, particularly since you’re unlikely to find many days when conditions are right.

“You’re talking 50 degrees, and then the freezing point is 32 degrees; you only have an 18-degree difference during a time of year when the daylight is shorter and the weather’s getting colder,” he says. “The opportunity is short.”

Lapacek says it’s important to take the time beforehand to make sure your equipment is in working order and ready to go at a moment’s notice. You might not get many chances to get into the field before the snow flies.

Besides making sure your equipment is ready, Lapacek says, you also need to make sure you’re ready to do the job safely. “Always, always wear your PPE,” Lapacek says.

Anhydrous ammonia can be a dangerous chemical to work with. So, understand the risks and how to avoid those risks before application day. This article from the National Ag Safety Database explains precautions to take while handling the fertilizer.

Use a Nitrogen Stabilizer
Lapacek’s fourth and final tip is to use a nitrogen stabilizer. “Stabilized fall nitrogen is the best fall nitrogen. We heavily promote at Carroll Service that every pound of N that goes out is stabilized,” Lapacek says.

Lapacek recommends using N-Serve® nitrogen stabilizer to protect anhydrous ammonia during the long months between fall and spring. He says N is one of the most expensive inputs growers must make each year and N-Serve helps maximize that investment. However, it’s not just the money that matters.

“Consider the environmental aspect. We like to talk about how the N can leach and get into places it’s not supposed to be, like watersheds. So, a product like N-Serve can prevent some of that. It’s a win-win for the environment and the customer,” Lapacek says.

N-Serve® nitrogen stabilizer is shown to reduce leaching by 16%.1 You can learn more about the other benefits of the stabilizer at NitrogenMaximizers.com.

At the end of the day, Lapacek says, if you have the time to apply anhydrous in fall, take advantage of the opportunity.

“If we can put the fertilizer on in the fall, it frees us up in spring. There are times in spring when we’re applying anhydrous ammonia when we could easily be planting instead.”

Don’t put off until tomorrow what you can do today.

1 Wolt, J. D. 2004. A meta-evaluation of nitrapyrin agronomic and environmental effectiveness with emphasis on corn production in the Midwestern USA. Nutr. Cycling Agroecosyst. 69: 23–41.