During World War II, a tiny atoll in the middle of the Pacific Ocean played host to the most important victory in the history of the U.S. Navy, when the Americans turned back the Japanese at the Battle of Midway.

Now, more than 70 years later, the Midway Islands are the site of a much different battle — one to restore habitat in order to save millions of threatened and endangered seabirds and other important wildlife species from an unwelcome and aggressive intruder.

When the war ended, Midway Atoll continued to serve as a strategically important U.S. naval base. But as military innovation progressed, its significance waned.

Slowly, the Navy began withdrawing resources, paring down a once thriving military community. But the islands had always teemed with wildlife. In 1988, it became the Midway Atoll National Wildlife Refuge. Later, it was designated as the Battle of Midway National Memorial, part of the Papahānaumokuākea Marine National Monument conservation area, and one of the largest marine-protected areas in the world, equal in size to the area of all U.S. national parks. These designations afford Midway additional protection to its unique natural and historical resources.

Now, the refuge is managed by the U.S. Fish and Wildlife Service (USFWS), which has stewardship over these islands rich in history and abounding with wildlife. The USFWS has responsibilities ranging from everything to upkeep of buildings, airport operations and logistics and managing vegetation to restore and enhance seabird nesting habitat.

A NEW INVADER TAKES MIDWAY TO THE BRINK

Over the years, the introduction of non-native plants, insects and mammals accompanied people to the islands and, over time, have negatively affected Midway’s abundant native wildlife. In 2011, Midway felt the effects of the massive tsunami in Japan, as the surge of water brought death and destruction to wildlife and its habitat. With only a handful of USFWS staff and 35 base operations support service contractors busy handling the full scope of island operations, conditions for managing the islands’ native species quickly worsened.

By the 1990s, one particular intruder had managed to blanket the islands in a wash of yellow flowers. Verbesina encelioides, or golden crownbeard, an aggressive invasive plant species, spread rapidly across the landscape, choking out native vegetation and destroying vital bird nesting habitat. Verbesina is a member of the daisy family, native to the southwestern United States and Mexico and features bright yellow flowers. Unchecked over time, the spread of Verbesina severely denigrated seabird nesting habitat, with significant consequences for several species, including the iconic Laysan albatross.

The Midway Islands are the world’s largest nesting ground for the Laysan albatross, a seabird that, at first glance, resembles a very large gull. Around 1.5 million Laysan albatross nest on Midway — about 65 percent of the species’ entire population. The refuge also provides essential habitat for the black-footed albatross and is home to the only nesting pair of short-tailed albatross in the United States.

Besides the albatross, 18 additional seabird species and the highly endangered Laysan duck nest on the refuge, adding approximately 2 million birds to the islands’ population. Habitat is precious here, considering the number of individuals and the total area of the Midway Islands — Eastern, Sand and Spit islands — is just 2.4 square miles.

“We have an inordinate amount of wildlife present here on Midway in a very small area, meaning we need to be exceptionally careful when doing our conservation work,” Clark says.

A COALITION TURNS THE TIDE

USFWS came to realize that solving the Verbesina problem would require additional resources beyond what it had available on Midway. To address this need, the refuge applied for and received a $1 million national refuge system large invasive grant allocation. Through a cooperative agreement with the National Fish and Wildlife Foundation (NFWF), an additional $1 million in funding was provided to restore habitat for seabirds by eradicating Verbesina and planting native species. 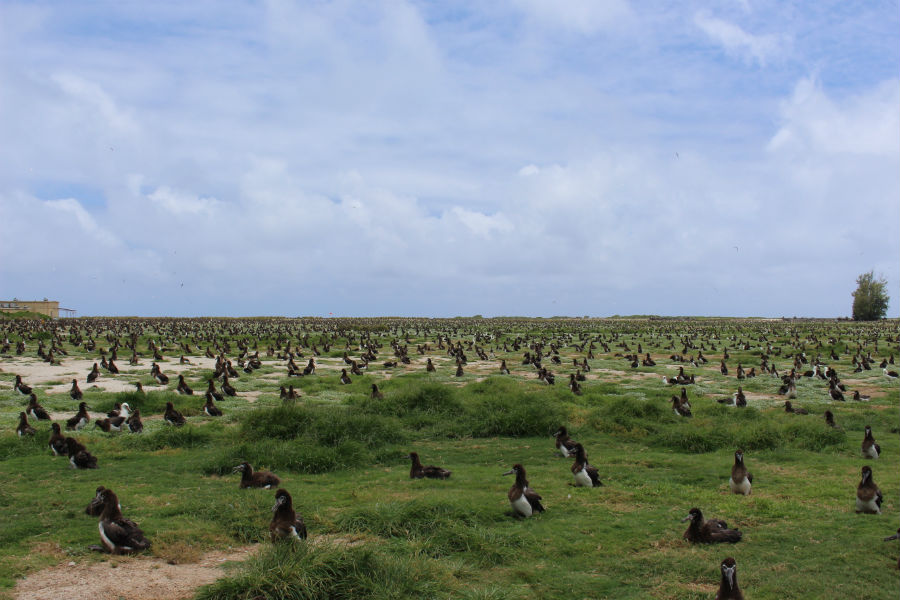 In addition to the $2 million in grant allocations, it’s estimated that an additional $4 million worth of equivalent in-kind support (volunteer hours, logistical and infrastructure support, etc.) was contributed. And, as part of this support, Corteva Agriscience donated 250 gallons of Milestone® herbicide, which has a proven track record of controlling Verbesina.

In 2011, with the grant in place and Milestone delivered, crews of four and five workers began applying treatments by using only backpack sprayers around the islands several days each week. A targeted application was necessary because nesting areas are present year-round and larger equipment isn’t capable of maneuvering in such tight spaces. Because Milestone® herbicide is nontoxic to birds and other wildlife, crews were able to confidently apply treatments in close proximity to the birds — a necessity when you’re dealing with 3 million birds living on just 2.4 square miles.

“The great thing about using herbicides such as Milestone is our ability to be proficient applying it, because we know that it specifically acts on plant processes such as photosynthesis and synthesis of amino acids — things that don’t affect birds,” Clark says. “We’re very comfortable using it around them, while still being very careful and surgical with our treatments.”

Improvement was rapid, and in just a few short years, Verbesina became scarce — although spot treatments will continue until it’s fully eradicated.

“Milestone gives us the ability to have suppression for a long period of time so we can come back frequently to keep that seedbank down,” Clark says. “It’s been a huge success, virtually eradicating Verbesina on Eastern and Sand islands — where our treatments are focused.”

IMPROBABLE RESULTS LEAD TO A SHIFT IN FOCUS

The results have been dramatic. Albatross nesting numbers on Midway are at record levels, hatchling success rates are increasing, and the landscape is returning to its natural state after years as a site for military operations. This year even saw Wisdom, a Laysan albatross who was first tagged by scientists in 1956 and is the world’s oldest known bird at 65, hatch a chick for the 40th time on Midway.

In fact, with Verbesina under control, USFWS has been able to shift its efforts to nurturing and planting desirable plant species to fully restore the islands’ native habitat.

In fact, with Verbesina under control, USFWS has been able to shift its efforts to nurturing and planting desirable plant species to fully restore the islands’ native habitat.

“We’ve ramped up our propagation of native grass and herbaceous species and using them to revegetate the areas we’ve cleared of non-native plants to restore habitat and keep other invasive plant species out,” Clark says. “Milestone is perfect for this situation because it allows us to treat the Verbesina without taking out existing or newly introduced grasses and forbs — which is obviously a tremendous benefit.”

The success of the Midway partnership is undeniable. Where nesting fields were once overrun by a thick carpet of yellow flowers, hatchlings again crowd the ground. And all the islands’ wildlife is benefiting from this restoration project. The use of Milestone on the Midway Atoll demonstrates that the right herbicide technology can help restore even the most out-of-control invasive species and make a sustainable difference for the future.

™ ® ℠ Trademarks and service marks of Dow AgroSciences, DuPont or Pioneer, and their affiliated companies or their respective owners. When treating areas in and around roadside or utility rights-of-way that are or will be grazed, hayed or planted to forage, important label precautions apply regarding harvesting hay from treated sites, using manure from animals grazing on treated areas or rotating the treated area to sensitive crops. See the product label for details. State restrictions on the sale and use of Milestone apply. Consult the label before purchase or use for full details. Always read and follow label directions. Always read and follow label directions.