It’s because there are so few of the birds and so much support to save them.

A popular icon in the region, the lesser prairie chicken once inhabited 180,000 square miles in parts of Colorado, Kansas, Oklahoma, Texas and New Mexico. But settlement and civilization have not been friendly to the shy bird.

The prairie chickens need large tracts of intact native grasslands. Conversion of rangeland to cropland along with other human development have depleted habitat. Drought, overgrazing and brush encroachment have degraded habitat quality. Today the bird exists in pockets equal to about 16 percent of its historic range.

For nearly 20 years, the lesser prairie chicken has teetered on the brink of being listed by the U.S. Fish and Wildlife Service as a threatened species. That’s one step below endangered and could trigger more regulation.

To increase numbers and range of the bird, state and federal agencies and even private conservation groups have partnered in the Lesser Prairie-Chicken Initiative. Because 95 percent of current habitat is on private land, the Natural Resources Conservation Service (NRCS) has taken the lead in on-the-ground efforts.

Those efforts include technical help and cost-share funds to improve overall health of grazing lands and the long-term sustainability of ranching operations.

Cooper first learned of the initiative from his local NRCS district conservationist. The initiative starts with ranches where populations of the lesser prairie chicken exist. The idea is to enhance habitat there, increase numbers and encourage the birds to expand their territory.

For Cooper, it meant technical assistance and financial incentives to do some things he and his father, Mert, wanted to do on their Cooper Camp Creek Ranch anyway. It started with a grazing plan developed in 2012 with NRCS grazing lands specialist Clint Rollins.

Since then, Cooper has used herds of 35 to 50 head rotating through two, three or four pastures, depending on rainfall and grass growth. He monitors that growth with 4-by-4-foot enclosures closed to grazing. “We move cattle when we’ve used half of the grass, or faster when it rains [and grass is growing],” Cooper says.

For Cooper, the grazing plan benefits his grass, gives him an emergency reserve and concentrates the cows so he needs fewer bulls.

For the prairie chicken, the light to moderate grazing allows for residual tall grasses — primarily little bluestem — to be left for nesting. 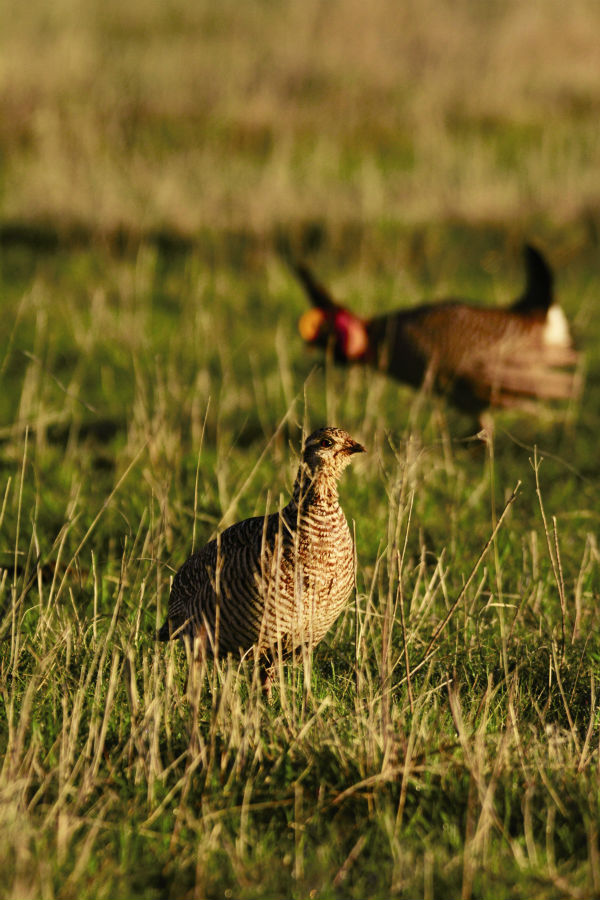 Lesser prairie chickens are known for their booming grounds or “leks” where males make competitive displays and females come shopping for mates. If the habitat is right, love is in the air.

To expand habitat for the bird, the NRCS recommended brush control to Cooper. In two key pastures, mature sand sagebrush made up 40 percent of the pasture canopy.

“We want some sand sage, but not too much,” says Mary Foster, the NRCS district conservationist working with Cooper. A little sand sage provides cover for the birds, but predators use dense stands, she explains. The brush also reduces grazable acres and causes grass to decline.

In the treated swaths, the helicopter applied 5 pounds of the pelleted herbicide (1 pound active ingredient) per acre. That was enough on the sandy soils, Foster says. Suppression appears to be lasting where pellets landed.

The native grasses have rebounded in the treated strips creating more habitat for the prairie chickens and more grazing for Cooper’s cattle.

NRCS cost-shared the application with Cooper through the Environmental Quality Incentives Program (EQIP). But because it’s linked to the Lesser Prairie-Chicken Initiative, the incentive payment is somewhat higher than for a typical EQIP project.

“But there’s a smaller pool of money, so it is competitive,” Foster says.

Cooper liked working with local NRCS experts he knew and respected. “And the programs are all voluntary,” he says. “I can walk away if I have to, but I feel like the ranch is better now.

™®Trademarks of Dow AgroSciences, DuPont or Pioneer, and their affiliated companies or their respective owners. Always read and follow label directions. ®Spike 20P is a trademark of Nutrichem Company Limited. Contact your state pesticide regulatory agency to determine if a product is registered for sale or use in your state. Consult the label before purchase or use for full details. Always read and follow label directions.