Cattle aren’t the biggest moneymaker on the Killam Duval County Ranch. That distinction belongs to the high quality, native whitetail deer on the place. But good range management benefits both, says ranch manager David Kitner, and brush control is part of that.

“In everything we do here, we think about wildlife,” Kitner says. “And as a cowman and a wildlife guy, I see benefits to both from spraying.”

Mesquite control is just the latest improvement Kitner and owner David Killam have made to the 130,000-acre ranch west of Freer, Texas.

When Kitner arrived in 2001, a few years after the Killam family bought the ranch, the land was in tough shape. The ranch had been overgrazed, and range condition was still poor. The manager and owner agreed on a drastic plan to improve range health.

“It takes time and money, and we had to remove livestock for three years,” Kitner says. After three years, they restocked with light stocker calves. Typically, they run about 3,000 head on the ranch. Last year, Kitner switched and brought in cows from another Killam ranch.

“Cattle are a tool we use,” he says. “We rotate them in big herds. The hoof action helps those capped soils open up to the next rain, so it all doesn’t run off.”

Cattle rotate through pastures varying in size from 1,100 acres to 9,000 acres each, averaging about 5,500 acres. Cattle spend two weeks to a month in most pastures, depending on pasture size. It’s usually a year before the same pasture is grazed again, and Kitner tries not to graze a pasture in the same season each year. Growing season rest allows native grasses to reseed themselves and build root reserves.

“Some people would have stuffed more cattle on here than we do,” Kitner says. “But I’m a glass-half-empty guy. I want to be able to weather a drought. I’d rather give up a little gain and help the country.”

The downside of the ranch’s improved grass cover is that runoff no longer fills stock ponds used as tanks. So the management team installed 200 miles of water line and added more water sources.

“Now cattle don’t have to walk more than 1.2 miles to water,” he says. “It took two years to get there, and we’re still working on it.”

In 2011, Kitner launched a program to reduce mesquite on the ranch. Many species of South Texas mixed brush are beneficial to wildlife, but mesquite is only of fair value and it dominated many sites. Kitner wanted to control the mesquite but leave alive the other, more valuable brush.

“We haven’t sprayed every year because the brush hasn’t been right — not the right conditions,” Kitner says.

His application rate is 28 ounces of Sendero per acre with 16 ounces of Tordon® 22K. The Tordon® 22K slightly boosts mesquite control in South Texas, and it suppresses the pricklypear, explains Range & Pasture Specialist Benny Martinez with Corteva Agriscience™. Without the Tordon® 22K herbicide, pricklypear density may increase when the overstory mesquite dies.

“We kill some pear and make more sick for a while,” Kitner says. “We feel like we’re getting between 80% and 90% mesquite control. We had a good job with the threeway mix, too, but I think Sendero is a little better.”

Just as important as the brush Kitner controls are the specific brush species he doesn’t control.

“Sendero leaves what we want to leave,” Kitner says. “Our No. 1 deer foods haven’t been hurt or they’re hurt only for a short time. Within six months, most of the mixed brush is back up and green. Some of this brush, Sendero doesn’t even knock the leaves off.” 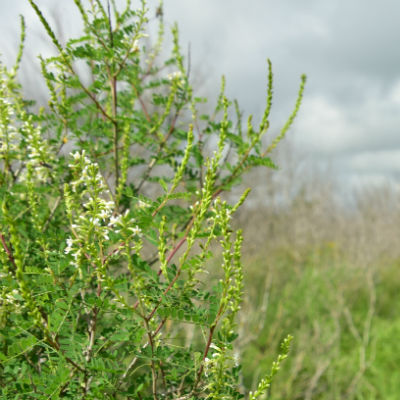 Kidneywood, another excellent browse plant, thrived through a 2017 application with Sendero® herbicide. 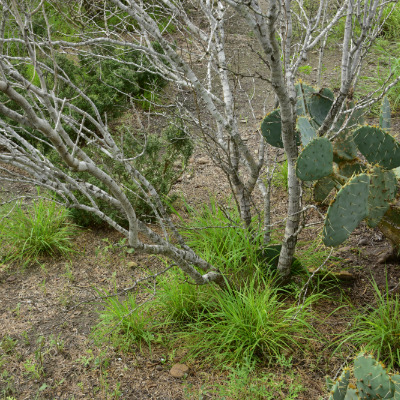 The pattern repeats in a 2018 mesquite application. Grasses and forbs respond when overstory mesquite stops.

Kidneywood, granjeno, coma, guayacan and guajillo have survived in his sprayed pastures while the mesquite has died. Grasses and forbs have boomed.

“We get a forb explosion when we get moisture after spraying,” Kitner says. “Lots of forbs — that’s the first thing you see. It’s amazing the seedbank that’s out there.”

From Worst to Best

The range improvement has turned some of his worst pastures into his best for both livestock and wildlife.

“That was the convincing factor,” Kitner says. “We sprayed the worst pasture on the ranch first. I thought it was the worst because of the soils — until we sprayed.

“Once it gets sunlight and moisture, it responds. Spraying didn’t hurt the deer food. It enhanced the forbs. Now deer migrate to it.”

Kitner can document the transfer and increase of deer in a pasture because he keeps such close tabs on them. He annually takes a census by helicopter. He net-traps and tags individual deer. He keeps harvest records on everything.

“Wherever we spray, deer migrate to it,” he says. “We’ll find tagged deer 10 miles from where they were tagged. Hunters see it. Now they’re asking about it and if we can spray more.

“We don’t feel like we’re hurting the country at all. We’re making it better. We wouldn’t do this otherwise.”

™®Trademarks of Dow AgroSciences, DuPont or Pioneer, and their affiliated companies or their respective owners.  Tordon 22K is a Restricted Use Pesticide. Reclaim and Sendero are not registered for sale or use in all states.  Contact your state pesticide regulatory agency to determine if a product is registered for sale or use in your state.  State restrictions on the sale and use of Remedy Ultra apply. Consult the label before purchase or use for full details.  Always read and follow label directions.