You’ve seen them: weedy patches or islands in a pasture where cattle wouldn’t graze. Grass may be growing with the weeds, but a cow wouldn’t touch it. Scientists call that grazing avoidance. It’s grass you easily can get back.

“These weeds are costing you in two ways,” Flynn says. “They compete with grasses for resources, and they essentially fence off part of your pasture from grazing.

“The return on investment from spraying pasture weeds comes both from more forage production and increased grazable area.”

Weed control typically yields a pound or more of grass for every pound of weeds controlled. Numerous demonstrations confirm that. But that 1:1 calculation counts only the competitive effect, not grazing avoidance.

Clippings from untreated check plots will include the grass that cows won’t graze because of a physical or chemical barrier.

Over the grazing season, they documented that musk thistle reduced the amount of forage utilized by 72% and bull thistle by 42%.

“Certain weed species tend to cluster together, usually in areas that have been overgrazed,” Flynn says. “Overgrazing opens the canopy and makes it easy for weed seedlings to take hold.”

In those areas, it’s common to find musk thistle, wild carrot, ironweed, dock, plantain and others. Infestations often start out as clusters. Early detection and spot spraying can be economical and give the advantage back to grass, Flynn says. But it doesn’t take many clusters to justify broadcast application.

“Our economic models show that when weeds are about 20 percent of the pasture composition, spraying will pay,” Flynn says. “The point of spot-spraying is to keep weeds from getting to 20 percent.” 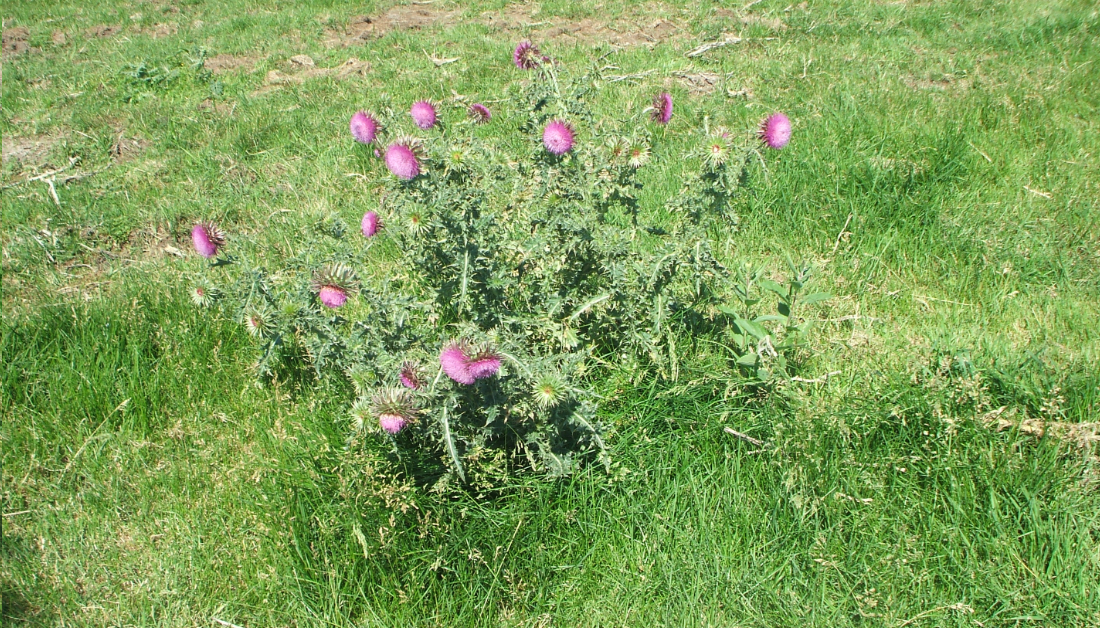 Broadcast applications can be a tool, along with grazing management, to encourage more uniform grazing.

“When animals start to avoid areas because of weed populations, cattle tend to focus on and overgraze other areas, creating new places for weeds,” Flynn says. “Over time, if you don’t address the weeds, you decrease grazable area.

Costs from stickers, thorns and sharp spines can extend beyond their effect as a grazing barrier. Cows may avoid them more easily in grazing than in hay. In hay, sharp points can cause injury or sores in an animal’s mouth that discourage forage intake. Anything that leads to reduced forage intake can reduce production.

“When we calculate return on investment from weed control, we focus on the competitive effects of weeds. Control a pound of weeds, get another pound or more of forage,” Flynn says. “And that’s the big effect. But weeds do cost in other ways. Grazing avoidance is one. Animal health, in many different ways, is another.”

Many common weeds are toxic at some level of intake, including buttercup, cocklebur, jimsonweed, perilla mint, nightshades and pokeweed. While cattle death from poisoning is rare, it happens. More often, animals just appear unthrifty due to a less-than-lethal dose.

™®Trademarks of Dow AgroSciences, DuPont or Pioneer, and their affiliated companies or their respective owners.