Sometimes you don’t need the key benefit of soil residual activity in your herbicide. Fortunately, you still have a good option.

Kevin Freed and his father, Buck, raise corn, soybeans, cattle and hay near Waynesboro in the Shenandoah Valley of Virginia. They keep their calves after weaning, buy some others and background them in their two drylots.

While the Freeds are frequent users of GrazonNext® HL herbicide to control weeds in their pastures, their go-to herbicide was a no-go in two situations last year.

Instead, on the suggestion of their supplier, Augusta Cooperative Farm Bureau, in Staunton, Virginia, the Freeds opted to use PastureGard® HL herbicide.

PastureGard HL is labeled to control more than 80 broadleaf weed and woody species, including some tougher weeds such as dogfennel and hemp dogbane. Of particular interest to the Freeds, though, PastureGard HL has no soil residual activity. GrazonNext HL does. 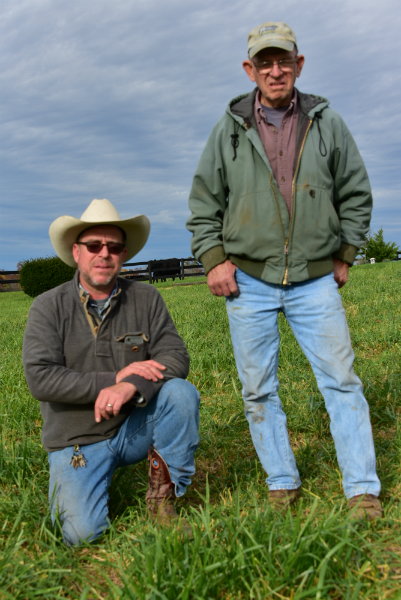 With row crops as well as cattle, Kevin Freed, left, and his father, Buck, are careful to manage the soil residual activity of their spraying.

While the soil residual of GrazonNext HL holds down susceptible weeds for weeks after spraying, it posed a risk for the Freeds in hayfields. It had to do with manure.

While the herbicide is still active in the soil, grasses may absorb and store the active ingredient. So, it may be present in hay harvested from treated grass.

When a grazing animal ingests grass or grass hay that’s been treated with a residual herbicide, the residue passes through without harm to the animal. But the active ingredient may be present in the manure or urine for three days after consuming the treated forage.

“The co-op has been pretty obvious with us about being careful with the residual and where the cattle go and where the manure goes,” Kevin says. It’s a point he appreciates.”

“Otherwise, it slips your mind,” he continues. “You look at something and wonder why it’s doing that. Then you remember, oh, yeah, that’s why.”

When they faced an invasion of chicory (blue weed) in a hayfield last year, they knew GrazonNext HL would control it. But there was the residual issue.

“We didn’t want any residual because we’ll use that hay with the stockers. We want to be able to use the manure from the feedlot on our crops,” Kevin explained.

The application of PastureGard HL at 24 ounces per acre cleared the weed from their hayfield.

The Freeds used PastureGard HL in another fescue hay field late in the summer when hemp dogbane and milkweed invaded after a second cutting.

This time they had another reason to go with the herbicide. PastureGard® HL herbicide provides better control of hemp dogbane. The Freeds sprayed in August with PastureGard HL at 24 ounces per acre.

“It did a nice job and we cut clean hay after that,” Kevin says.

The precautions about soil residual activity are all included on the label for GrazonNext HL herbicide, says Dr. Scott Flynn, a field scientist with Corteva Agriscience™.

Over the season, the key active ingredient breaks down and the soil residual activity dissipates. But enough may remain for the next two years to damage sensitive crops if the pasture is converted to cropland. Don’t plant a broadleaf crop until an adequately sensitive field bioassay shows the crop won’t be affected.

Treated grass hay should never be used, sold or given away for mulch or compost. Enough of the residual ingredient could leach from the hay to damage sensitive broadleaf plants. Likewise, don’t feed treated hay on land to be planted to sensitive crops.

™®Trademarks of Dow AgroSciences, DuPont or Pioneer, and their affiliated companies or their respective owners. GrazonNext HL is not registered for sale or use in all states. Contact your state pesticide regulatory agency to determine if a product is registered for sale or use in your state. The information presented here is not an offer for sale. Always read and follow label directions.